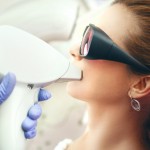 Polycystic ovarian syndrome (PCOS) affects between 5% and 10% of all women of reproductive age. It can affect fertility and general health as well as having an impact on physical appearance and self-esteem.

Polycystic ovaries are ovaries that contain many small cysts, which are egg-containing follicles that have not developed properly due to hormonal abnormalities. It is possible to have polycystic ovaries without actually having the syndrome.

PCOS cannot be cured, but it can be successfully controlled with the right treatment, allowing the patient to live a normal life.

If you suspect you may have PCOS, it is important to seek advice from your GP as soon as possible.

One of the common symptoms of PCOS is excessive or unusual hair growth, known medically as hirsutism. This can be due to an unusually high level of masculine hormones (androgens). In some cases, NHS funding can be obtained to treat this, and at Skin Medical we have had a number of patients who have been referred to us having obtained funding from their Primary Care Trust (NHS PCT) as organised by their GP.

Hair removal is generally viewed as a cosmetic process, but if the unwanted hair results from a recognised medical condition and is causing significant distress and psychological impairment, the patient may be eligible for financial assistance from the NHS to treat it.

What are the other main features of polycystic ovarian syndrome?

Symptoms of PCOS usually begin during adolescence, but can also start in the early or mid-twenties.

There is a strong correlation between PCOS and conditions such as obesity, diabetes and insulin resistance.

Women with PCOS can also be at risk of developing other serious health problems.

If you suspect you may have PCOS, it is important to seek advice from your GP as soon as possible.

A doctor will determine the best way to treat each individual case of PCOS.