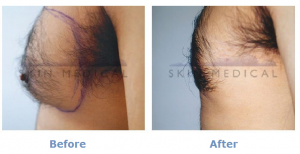 It’s no surprise that we live in a world consumed with images of the perfect ideal. We are constantly bombarded with media advertisements and celebrities promoting this ‘perfect ideal’, such as being thin or looking as young as possible. In turn, this pushes many people to invest in cosmetic surgery to improve their physical appearance. One of the most popular treatments to have risen over the past couple years, is Liposuction. The most talked about version of this today is known as Vaser.

Vaser stands for Vibration Amplification of Sound Energy at Resonance. In short, it’s a form of liposuction using ultrasound energy to gently breakdown excess fat cells without damaging any surrounding tissues. Once these cells are broken down, small cannulas are used to suction and remove this excess fat. This is known as emulsification. Such technique allows for specific contouring of the body, it is able to sculpt and shape certain delicate areas such as neck, thighs, arms, flanks and male Gynecomastia (otherwise known as ‘Man Boobs’).

In the last few years, there has been a significant rise in cosmetic surgical procedures for men. In the past, cosmetic surgery was originally used to treat fatally injured soldiers, however as the image of this ‘perfect ideal’ was promoted more and more, it quickly became an area dominated by females.  In addition, there was much stigma applied to men who sought after any sort of beauty products or cosmetic surgery. Nowadays, the rise of modern values has drastically altered this misconception and society as a whole is now embracing individuality and specifically, male cosmetic surgery.

The number of British men undergoing cosmetic surgery has doubled in the last ten years. The British Association of Aesthetic Plastic Surgeons (BAAPS), has reported that ‘whilst men still only account for nine per cent of all cosmetic surgery operations, a record 4,614 UK men underwent a procedure last year for purely aesthetic reasons.’  Many believe this rise in male cosmetic surgery is due to the relaxation of social stigma. Men are now able to achieve a faster and easier way to their ideal bodies.

One procedure that is on the rise among males is Vaser Liposuction, one of the major selling points with this is due to little downtime. The flexibility of allowing patients to return to their daily routine in a short space of time is certainly an aspect in its growing popularity. Additionally, another reason for its popularity is due to Male Gynecomastia, a condition that affects more than one third of the world’s male population, also known as ‘Man Boobs’.

While this does not pose any health threats, the difficulties faced by men from enlarged male breasts, is more directed towards embarrassment reasons.  The procedure helps create a more sculpted and athletic appearance, and helps define pectorals. This leads to men having increased self confidence, feeling more in proportion and less self conscious.

At Skin Medical, our specialised Doctors and Medical Practitioners have over ten years experience in performing Vaser Liposuction, and we are assure the best quality care and results.

To book a free consultation with one of our experienced practitioners or to find out more about any of our treatments or products, please contact the Manchester city centre clinic on 0161 839 7663 or submit an online enquiry.