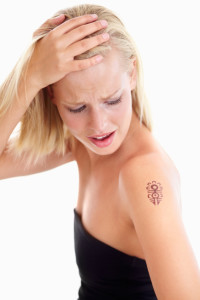 With 1 in 3 millennials having a tattoo according to Real Self, it’s no surprise that the number of laser tattoo removal treatments performed is on the rise. The popularity of tattoos during the 1990s and 2000s means that Brits now have approximately 20 million tattoos. However, the era of tattoos is over – and we’re now entering an era of tattoo removal, in which many tattooed Brits are experiencing regret over the decisions they made in the past.

Lifestyle changes often fuel the regret, but some are opting to have removal so they can re-tattoo the area with a more preferable design. Some people are even having their tattoos removed as it interferes with technology, such as the Apple Watch. And celebrities aren’t immune – many stars have had their tattoos removed also.

Technological advances mean that laser tattoo removal is safer and more effective than ever before. Tattoo removal was previously a primitive treatment, and often involved a series of lengthy, ineffective treatments or surgical removal. Many tattoo removal creams appeared on the market, but they often did little to fade the tattoo. Likewise, home tattoo removal kits have proved to be unsafe and ineffective. However new laser technology, such as the Active Q-Switch ND Yag Laser can effectively, permanently remove ink in just a few sessions.

The revolutionary technology means that a tattoo can now be permanently removed in just a handful of 30 minute sessions, with minimal downtime. An added bonus is that whilst previous machines could only treat a few colours, the new technology is capable of treatment a number of colours which had previously been impossible to remove.

Over a series of sessions, the new technology breaks down the pigments in the ink. These pigments are then absorbed by the blood stream and leave the body naturally. The sessions can take place just a few weeks apart, meaning your tattoo could be gone sooner than you might think.

Laser tattoo removal treatment is increasingly popular, with the number of treatments up by 440% over the last decade. Changing attitudes and better technology explain why we’re now entering the era of tattoo removal, as more people choose to permanently zap away their ink.

To find out more about laser tattoo removal treatment, contact the Manchester clinic on 0161 839 7663 to arrange a free consultation.